HOW IT ALL BEGAN

HOW IT ALL BEGAN

Giving2Grow began as a conversation between friends. Founder Jennifer McDowell heard about Giving Circles from some out-of-state friends, and was surprised when she couldn’t find any back home in Pittsburgh.  She poked around and talked to several people who had started giving circles elsewhere. A visit to the founders of Anne Arundel Women Giving Together (www.givingtogether.org) in Annapolis, MD sealed her resolve to start one here.

Lisa Turbeville Markowski,  Lea Anderson and Joyce Salls joined in soon afterwards. After a long series of discussions with local community foundations, they decided they could move faster and be more effective on their own.

After two years of planning, and the formation of a Pennsylvania non-profit corporation, Giving2Grow was launched with an open organizational meeting on a frigid night in December, 2013.  Twenty-eight women attended—about twice the expected turnout!  Word spread, and the mailing list quickly doubled, then quadrupled.

By the end of 2014, less than a year after signing their first member, Giving2Grow had grown to 61 Founding Members!!! Since members renew annually, the number fluctuates, but has increased every year. 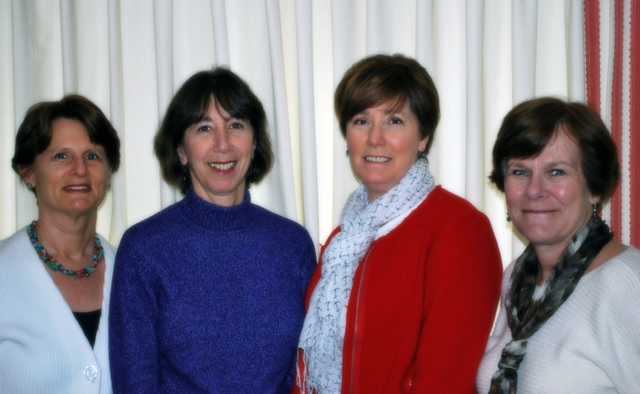 Each member annually donates $500 to Giving2Grow. The money is pooled and granted each year to organizations that serve our mission. Each donating member casts an equal vote as to which organizations receive the money. The membership/grant cycle is repeated annually.

For example: With 100 women giving $500 each, Giving2Grow could grant up to $50,000(!) to local non-profit groups that address child hunger in Western Pennsylvania.

Giving2Grow is a non-partisan group that welcomes women from diverse communities and backgrounds who wish to join us in addressing the issues of hunger and nutrition in the children of SW Pennsylvania.  While we encourage personal involvement, the only requirement for membership is an annual contribution of $500.